It was a great end to a great class full of taking chances, making mistakes and getting messy (first of many Magic School Bus references to come)! This week my classmates and I had a chance to show off our Aruidno/Processing skills by sharing our completed/semi completed exhibits with each other.

For a complete review of the exhibits with photos, please visit my classmate Matt’s blog post on the day (“Creative Minds of Our Class”).

You’ll remember from my last blog post on my arduino project that I discussed project completion and non-completion. Sometimes, in life, the pieces of a project just don’t all connect. It’s part of reality. Sometimes you might not have enough time or enough resources or enough experience or knowledge. Sometimes you may not get your final product. You can beat yourself up over not finishing a project but in cases like this the whole thing is about what you’ve learned. So while my project ended semi-completed I learned a lot about constructing a project using a variety of resources. In discussion one day with my class mate Heather, we decided that in the end of this program (our public history program) it’s not really about the product (we were also discussing our public history group project, which at the time, was a headache). It’s more about the experiences and the knowledge you gain from working on those projects. If we were to leave Western without these learning moments and without having overcome the many challenges the projects threw our way, it would be more dissatisfying than if we hadn’t completed the project. And while my project wasn’t completed (it was semi-completed) the learning experience was still as valuable as if I had completed the project.

I Learned a Whole Lot

I wish I had some sort of ribbon or certificate to put on my parent’s fridge. Though it would say “This Certificate of Semi-Completion is Awarded to Adrian for his work on his Awesome Arduino Project…” I could still say “Gee Ma, I learned a lot.”

But seriously, I learned so much.

Before this class I would have had no idea so much technological capabilities existed. And I would never think that others would have the same ideas and the same problems. When I visited museums and participated in interactive exhibits, I just thought it worked without thinking about how it was actually put together and operated. Having so much museum visitation experience and curator experience myself, I can now see what it actually takes to put such an interactive exhibit together. I have tried (sometimes successfully and sometimes not) to put together exhibits in my own inventive way. I think all our arduino projects started out the same and had the same tone as my earlier ‘homemade’ exhibits: “I want something cool to happen.” In the past when I would say “I want this to happen” I would make it happen but it would be so backhanded and so homemade that I would always find better ways of doing it after the project was completed. This time around, with the guidance of Bill our fearless leader, I was able to see, with a little help from the internet, that tons of people had already tried and failed and tried and failed again to accomplish what I set out to do. Seeing that others had shared in a similar strife that I was dealing with in my project made the idea of ‘open-source’ learning all more real and a much more positive force than I had given credit to in the past. Without the assistance of the many blogs and blogging techies out there in the interweb, I would not have been able to get as far as I got.

Which we’ll get to in a second, I’m still talking about learning!

The cool technical stuff I picked up along the way was really very rewarding. I’m not going to pretend that I actually know everything about arduino and processing and constructing digital landscapes and making exhibits work. But what I can be very proud of what I did learn and the new skills that I acquired. I can read code! I can make a small LED light, connected to an arduino through a bread board light up! I can write code! I can get arduino to play with a variety of different tools/toys and make it work when something goes wrong. I I can do almost anything! Well, maybe not but when I think about all the stuff I learned, I feel like this girl;

And so it comes to an end.

My final project was one of the semi-completed projects. But just because it was only semi-completed, doesn’t mean that it wasn’t so totally awesome!

If you’ve been following my arduino diary, you’ll know the just of my project. By scanning one of our colourful Canadian dollar bills on the colour reader, arduino launches a presentation/exhibit based on the colour’s portraiture. The colour reader can read colours and send the data back through arduino by shining a small but very bright LED light and capturing the reflected rays of light and translating them into numbers. The colour reader and the code that I used could only read red-green-blue-white colours so I had to use solid colours to get more ‘stable’ readings. Once the colour reader identified what colour it was reading (by gathering averages of the data or ‘smoothing’) it would launch the exhibit for the visitor and they could learn all about whichever portraiture they had in their pocket.

How did it all end up? Pretty good if I do say so myself. I jerry-rigged a match box to hold the bread board, arduino and the colour reader – that way it was small and compact. I had originally wrapped the contraption in Patriotic Canadian Red paper but then that through off the colour reader. Went with white and it worked. For the presentation, I demonstrated the colour reader capabilities by showing off the data on the serial port with the different colours on the reader. I then tricked a few by using my wireless mouse to pretend to launch the exhibit and showed my classmates my neat skills on powerpoint.

The semi-complete nature of my project comes from the fact that the arduino/colour reader did not launch the exhibit. But. Everything else worked. I got the colour reader to read and the data in the serial port showed that it was also able to differentiate between colours. My only regret is not having a computer that would operate processing – only then would I have a chance at launching the exhibit with colour and…taking over the world.

Anyway, here are some photos of me and my exhibit during our ‘show & tell’ day last week. Thank you so much for following my struggles and successes in the Arduino Diaries! 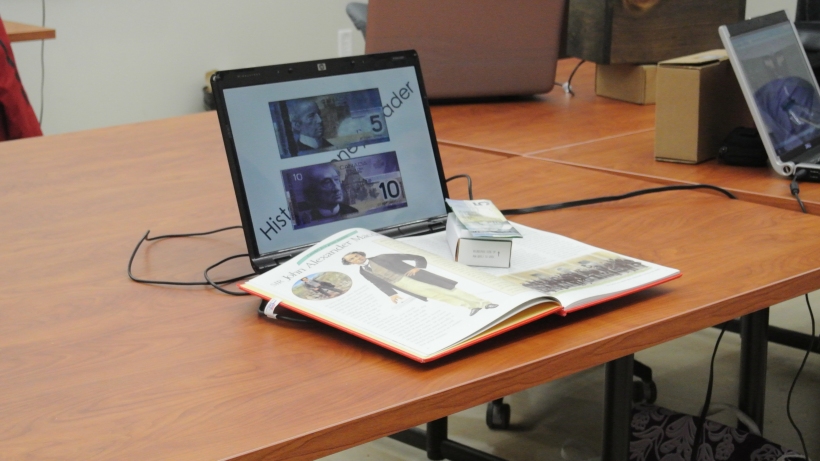 Prime Ministers – the power point document and exhibit piece of the project.